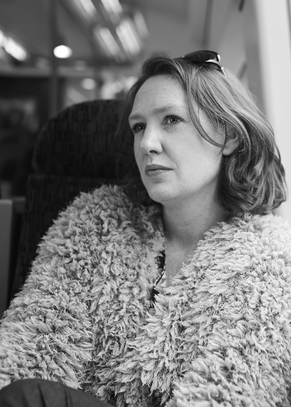 Paula Hawkins
I saw The Girl on the Train whilst appropriately browsing in a bookshop in Waterloo station on my way home on my daily commute in and out of London. The back-cover of this thriller drew me in, immediately reminding me of the 4.50 from Paddington by Agatha Christie, where someone else sees something shocking that they were not intended to from a train window and in a single minute is also drawn into a web of lies and murder. But in this case the story of the disappearance of a woman is cleverly brought together with an intimate perspective of the daily London commute.

But every day her train shudders to a halt at the same set of broken points and she stares into the same three back gardens and houses, watching the lives of those who live there as they drink their morning coffees in the sunshine, embrace their loving partners and feed their babies.

Drinking on the normal commuter train home is an immediate signal that all is not right in Rachel's world. Having a G&T is fine on the trains that leave London after 8pm with everyone jolly from having a quick drink after work, sometimes actually choosing to talk to strangers, but stopping at the Whistlestop in Euston for a small bottle of Chenin Blanc to drink on the 5.56pm straight after work means risking the pitying stares of strangers.

The book is structured around Rachel's daily journeys and through them you see her life unravelling. Her days in London turn out not to be spent at a boring desk job as they once were, but are now spent wandering the capital's streets and lying drunkenly in London parks, watching Mums play with their toddlers as she is avoided as being clearly drunk and alone in the daytime.

As the book develops you discover more and more about Rachel and her relationship to those houses next to the points where her train always stops and to the people that live there, as she begins to play a role in the sinister disappearance of a woman who she has been watching out of the train window every day. As Rachel's life further unravels she is drawn into the dark and dangerous centre of a chilling set of characters. Slowly you begin to realise all is not as it seems and that it may not be Rachel herself that is the problem after all.

Megan is still missing, and I have lied - repeatedly - to the police.
I was in a panic by the time I got back to the flat last night. I tried to convince myself that they'd come to see me about my accident with the taxi, but that didn't make sense. I'd spoken to police at the scene - it was clearly my fault. It had to be something to do with Saturday night. I must have done something. I must have committed some terrible act and blacked it out.
I know it sounds unlikely. What could I have done? Gone to Blenheim Road, attacked Megan Hipwell, disposed of her body somewhere and then forgotten all about it? It sounds ridiculous. It is ridiculous. But I know something happened on Saturday. I knew it when I looked into that dark tunnel under the railway line, my blood turning to ice water in my veins.
Blackouts happen, and it isn't just a matter of  being a bit hazy about getting home from the club or forgetting what it was that was so funny when you were chatting in the pub. It's different. Total black; hours lost never to be retrieved.

Extract from Paula Hawkins, The Girl on the Train

My partner suggested I read it as it is written - part of a chapter on the morning train and part on the way home. But that would have been far too spooky and I was too impatient not to read it for the whole of my journey until I had finished it. It was slightly less disturbing reading it on the train than it would have been if it had been describing a train journey in and out of London Waterloo, or the 6.47am that I take every day, rather than the 8.04am. I was also relieved that my daily train does not always momentarily stop in the same place or my imagination might have started running away with itself. 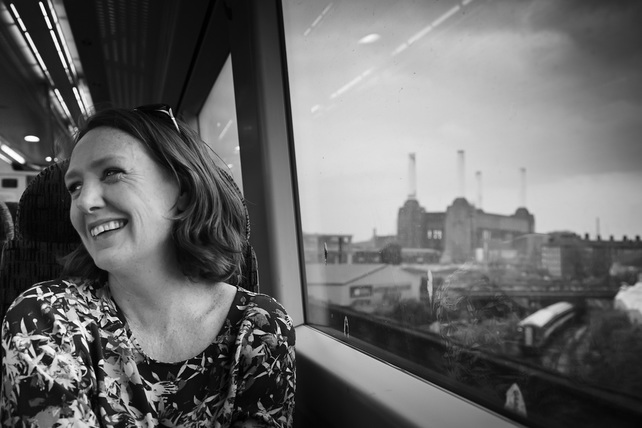 Paula Hawkins - photo, Kate Neil
That's because it so accurately describes the London commuting experience. The way people look and behave and the way it feels to be stuck in a hot sweaty train with a bunch of hot sweaty strangers that you see every day. This part of London life was crying out for this book to be written.


Jo Casebourne blogs about what she's reading at www.thereadingproject.co.uk Her blog was inspired by a great book she read on happiness. It roams across non-fiction related to her day job researching public services, as well as a somewhat eclectic taste in crime, historical and literary fiction.


All rights to the text remain with the author.
And here's the link to the London Fictions home page