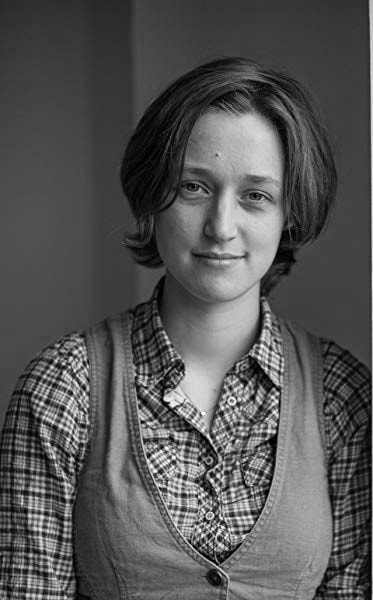 Claire North
​84K  is a dystopian imagination of London and its relationship to its outside by a writer who was educated in and lives in London herself. Claire North is a pseudonym for Catherine Webb, an award-winning and critically acclaimed novelist who also writes under the name Kate Griffin. Catherine Webb has studied in instantly recognisable London Institutions such as the London School of Economics and the Royal Academy of Dramatic Art. 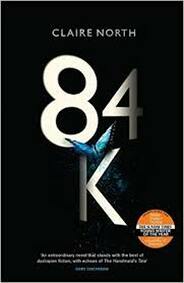 The relationship between London and what is external to London is explored in 84K​ through a transformative journey outside of the city, and then a homecoming, in which London itself is transformed through widened experience and understanding. The novelist’s imagination characterises the City as one that is distinguished by its wealth, a wealth that transforms its citizens into apathetic and amoral people that can only see each other’s lives in terms of money, how much life “costs”. Those living in the centre of London are particularly presented as exploiting their wealth and power to oppress and even murder the less wealthy because their lives don’t appear to “cost” much at all.

Although the world of the novel is a dystopia, we find that it has eerie affinities with our own London and its division along lines of wealth and privilege. We find the unlikely hero of the novel, Theo Miller, living as a lodger in cramped conditions in Tulse Hill. The London that he inhabits is strictly divided up between those that can buy prime property and the others who can’t. As North writes, there is a “resident’s permit to Zone 1” which appears to be available only if one is paid more. One’s money determines one’s experience of the City: Theo “would never have the credit rating to enter Pimlico by LondonArts as anything other than a tourist of course”.

Theo is stuck in his London and his life at the Criminal Audit Office which monetises crime and negotiates cash indemnities with criminals and murderers. If you kill, you pay money and you are free again to commit crimes and murder so long as you have money to pay for them. If you don’t have money, then you are forced to work in menial roles administered by the Corporation that runs the Government of the country in the novel. The Criminal Audit Office’s accountant philosophy is represented in plaques such as “Reimburse Society!” and “Justice at Reasonable Cost!” In fact, it can be seen that the Criminal Audit Office stands as a larger metaphor for the make-up of London itself, which is divided up on the basis of how much cash you have.

The Criminal Audit Office represents a translation of the London property market into a legal entity. It stands for the imagined legal community of London. If you have cash, and presumably live in the centre of London, where all the wealth and power is, you can buy off outsider and marginalised status, a being on the outskirts of London life, or the periphery. You can cling to the wealth and power that the City offers and all your crimes are tolerated. If you don’t have cash, then you are stuck on the outside and the margin, never able to improve your lot, prey to the wealthy and the powerful and their domination and oppression. Indeed, the women who cannot pay indemnities are reduced to a life of prostitution and effective slave labour in the “enclave” just outside of London. The novel is therefore an interesting meditation on how the centre and periphery of City life can stand and be understood in an analogy to the operations of justice and power. It is left to the reader to decide how much such an analogy can be seen to represent actual historical conditions and “legal spaces” in our own society.​ 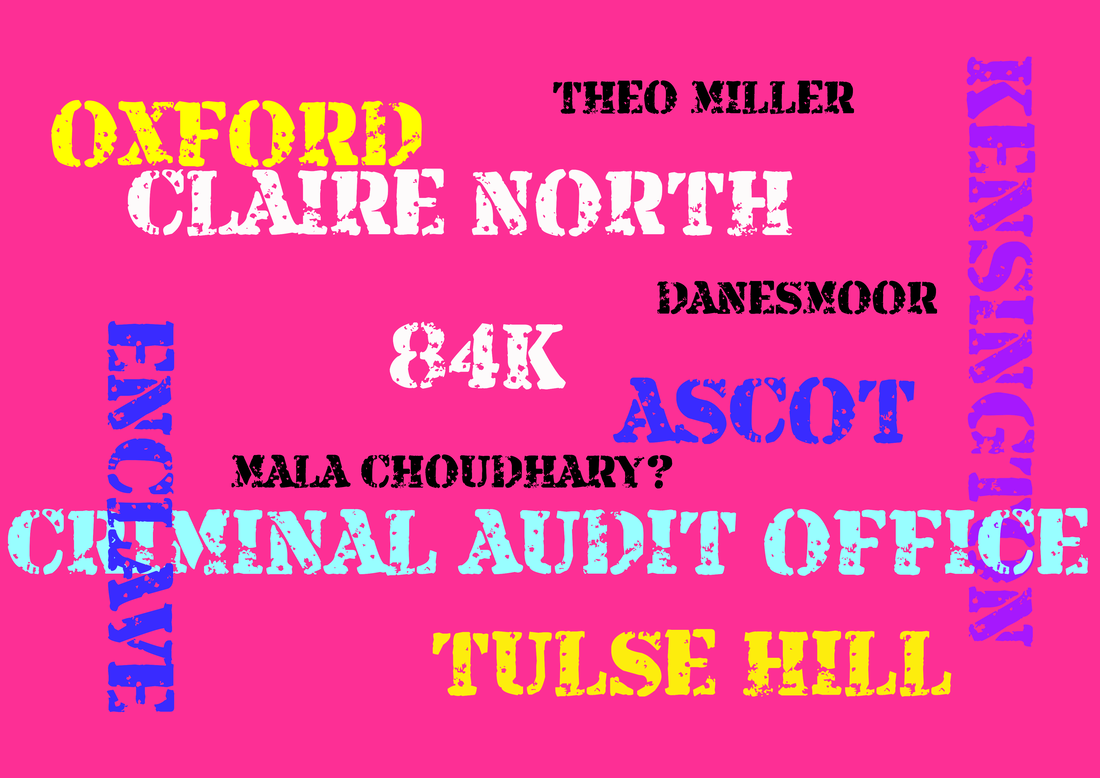 The lives of the marginalised Londoners are represented as the worst of slum and ghetto conditions. One day, Theo leaves the city because of his personal interest in one of the working class of London who lives in the “enclave”. The place is described in the following terms:

Once the place had held a family, two parents, two kids, three at a squeeze. Now every room had been subdivided, padlocks put across the doors, nine people to a toilet. People like to claim it was where the scroungers went, the traitors who couldn’t get a job and had lived off the charity of the state, before the Company had moved in and sorted things out, businesslike, making sure people who didn’t try couldn’t get.

No one admitted that the enclaves held the bin men, cleaners, waiters, janitors, porters, shelf-stackers, carers who wiped the old women’s bums, bus drivers and health assistants too skint to afford anywhere else. Everyone has to make a choice, the Company said. You have to choose success.

The novel explores what happens when Theo decisively abandons London and its imagined legal community to search for “real justice” before he finally returns to change conditions. The catalyst for the transformation of the hero is finding that a lover from a previous life, Dani, has been murdered. There are other complicating circumstances and Theo finds that he cannot trivialise the crime against the woman as just another matter for negotiation and monetisation.
​ 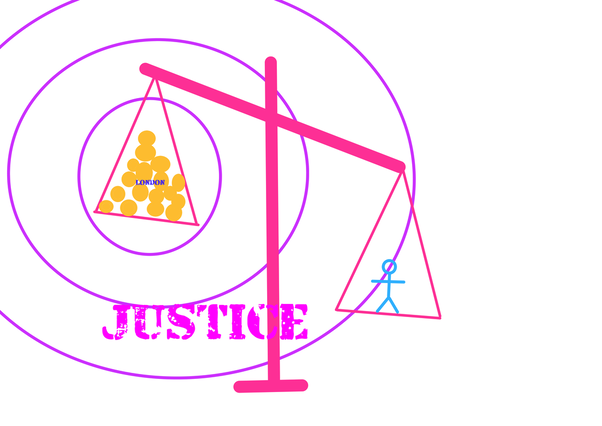 The novel is not only a critique of London as it is, our conception of success, worth and their unfairness. It is also an exploration and argument for the basis for justice in the worth of human life, in the love of others. This idea, which perhaps derives from and updates classical Humanism, is certainly powerful and North does a good job of exploring its relationship to the law and the politics of the dystopia in the novel, as well as its suggested relationship to our own law and politics in this country. Indeed, the novel is a consciously political one and investigates both a life inside of approved law and approved politics and one that it outside of this realm.
​ 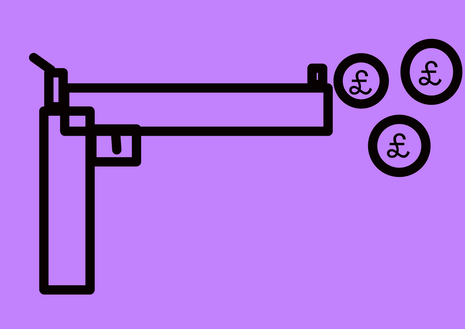 Certainly, this is an interesting novel. Certainly, it is philosophical. Certainly, it is political. But, who is it for? As a British Asian critic, there is for me something amiss in the writing. Sadly, the most obvious face of a justice and a law gone awry in the novel, a London lawyer who sees other humans only in terms of their monetary value, is a British Asian woman, Mala Choudhary. Her identity is implicitly contrasted with the hero, who finds “real law” and “real justice”, a white man. Why does the face of a law gone wrong have to be that of a woman and an ethnic minority, while that of a just law has to be that of the privileged and majority males in our society? For me, there is an unfortunate intersection of racism and sexism in a novel which otherwise takes the side of immigrants, women and the oppressed in society. However, fairness is in celebrating the attempt of a novel, even if there are failures in execution.

​Even if the novel relies on negative characterisations of my own community, I feel that it still represents larger understandings of justice and it is important to examine and re-evaluate those notions, especially as they relate to gender and race. I still recommend this novel and invite the reader to reflect on its representation of the law and how it is bound up in politics, so that you may arrive at a greater understanding of your own political position and your idea of the law, of the imaginary legal community of London and Great Britain.

Suneel Mehmi is currently researching the relationship between photography and law in fiction from the mid-nineteenth century to the 1920s. He is a scholar and an amateur writer, poet, singer/songwriter, musician and artist. Suneel lives in East London and holds degrees in Law and English Literature from the London School of Economics, Brunel University and the University of Westminster.

Original artwork by Suneel Mehmi who retains rights to these images and the text.
​
And here's the link to the London Fictions home page