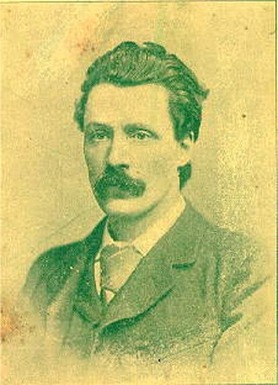 George Gissing
George Gissing is, in some ways, a forgotten author.  His subject matter was unrelentingly grim, his world view invariably pessimistic and his work lacked any hint of literary experimentation.  Perhaps, then, one might say he deserves to be forgotten.  But that would be to overlook his unique achievement as one of the most resonant voices of the neglected margins of late Victorian society and, above all, as one of the first great London writers.

Gissing was born in Wakefield in 1857 to middle-class parents.  A brilliant scholar, he attended university but was sent down after stealing from fellow students to fund his affair with a prostitute with whom he had fallen in love.  Gissing spent much of his working life in penury in Islington and similar areas of inner London. But a late blossoming of his career brought him literary acceptance and some degree of financial security in his final years.  George Gissing died in France at the age of forty-six. 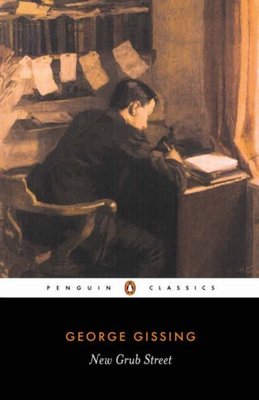 Gissing’s career coincided with the decline of the circulating libraries and their grip on British literary life.  For almost two generations these libraries, most notably Mudie’s, had dominated the market for fiction; they made the weighty three-volume novel the norm and held down the earnings of writers.  By the 1880s, however, their dominance began to decline with new publishers beginning to produce cheaper, slimmer volumes and a blossoming of new magazines aimed at the mass-market.

In New Grub Street Gissing highlights the threats and opportunities this new mass culture offers.  Edwin Reardon, a gifted scholar, finds some initial success in writing fiction.  He gives up his job as a clerk and spends most of his earnings from writing on a European trip.  He then marries the socially ambitious Amy Yule, who is dazzled by his apparent literary talent.  Under pressure to produce, and unwilling to compromise his artistic ideals to meet the demands of the market, he struggles:

For months he had been living in this way; endless circling, perpetual beginning, followed by frustration.  A sign of exhaustion, it of course made exhaustion more complete. At times he was on the border-land of imbecility; his mind looked into a cloudy chaos, a shapeless whirl of nothings.

Eventually, both Reardon’s health and his marriage collapse.  Like many of Gissing’s male characters, his depiction of Reardon betrays a degree of self-portraiture.  Indeed, Gissing turned out New Grub Street in just two months, a rate of 4,000 words a day; much the same as that demanded of Edwin Reardon in Gissing’s book.

The title of the novel refers back to ‘Grub Street’, an area once located off Moorfields which became synonymous in eighteenth-century London with hack-writers and a commodified publishing industry.  In New Grub Street, Gissing represents a literary world that is blighted by overbearing commerce, greed and exploitation.  But not all his characters suffer at the hands of these forces.  Whilst Reardon and his friend Biffen represent the past, Reardon’s acquaintance and fellow writer, Jasper Milvain, is portrayed as a man of his times.  He grasps every commercial opportunity and makes the most of his limited talents:

Literature nowadays is a trade.  Putting aside men of genius, who may succeed by mere cosmic force, your successful man of letters is your skilful tradesman.  He thinks first and foremost of the markets.

This is a literary world centred on London.  Reardon tries to argue that this should not be so in an impassioned conversation with Biffen:

It's a huge misfortune, this will-o'-the-wisp attraction exercised by London on young men of brains. They come here to be degraded, or to perish, when their true sphere is a life of peaceful remoteness. The type of man capable of success in London is more or less callous and cynical. If I had the training of boys, I would teach them to think of London as the last place where life can be live worthily.

But Jasper Milvain’s success suggests otherwise.  He is able to exploit the opportunities the London literary market presents; a market driven by reviews, publicity and alliances.

A mood of pessimism hangs over the London of New Grub Street and Gissing despairs of the fate of the creative individual when faced with the increasingly commercial world of publishing.  For Gissing, who learned about hardship at first hand and experienced artistic disappointment during his time in London, the city represents nothing but ugliness and despair.  He writes of a despair so profound that it leads to Biffen’s decision to attempt to take his own life:

One must go far in suffering before the innate will-to-live is thus truly  overcome; weariness of bodily anguish may induce this perversion of the instincts; less often, that despair of suppressed emotion which had fallen upon Harold. Through the night he kept his thoughts fixed on death in its aspect of repose, of eternal oblivion. And herein he had found solace.

Yet Gissing evokes a more traditional image of London when he describes the view from Reardon’s bachelor flat early on in New Grub Street:

The green ridge from Hampstead to Highgate, with Primrose Hill and the foliage of Regent's Park in the foreground; the suburban spaces of St John's Wood, Maida Vale, Kilburn; Westminster Abbey and the Houses of Parliament, lying low by the side of the hidden river, and a glassy gleam on far-off hills which meant the Crystal Palace; then the clouded majesty of eastern London, crowned by St Paul's dome.  These things one’s friends were expected to admire.

But this is not Gissing’s London.  New Grub Street concerns itself no further with the kind of aesthetic evocation of a panoramic landscape of the city that this passage suggests.  Instead, the book presents us with, in John Goode’s words, a London of struggling writers ‘living in a middle-class style on a working-class income’.

There is a consistent image in Gissing’s books that echoes the works of certain earlier writers, most notably Blake.  This is the image of the man walking through the city.  New Grub Street offers numerous examples of the plot being moved forward by a character walking the city streets.  Reardon frequently walks by Amy’s mother’s house in the hope of seeing his estranged wife and Biffen walks to Putney Hill to end his life.   Public transport is only used on special occasions.  In one notable episode Reardon and Biffen travel by cab to London Bridge Station when Reardon is summoned to Brighton because of his son’s illness. 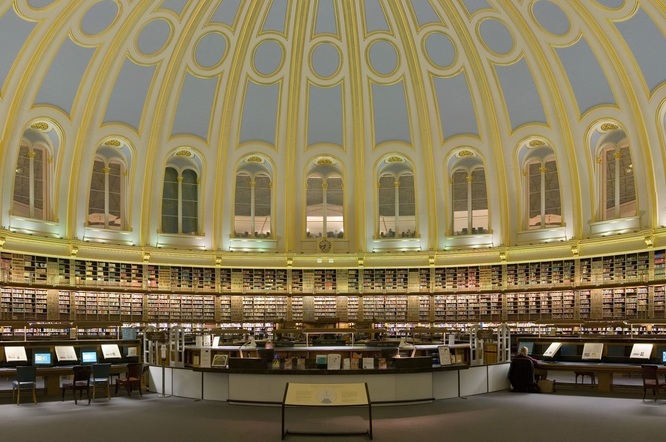 The British Museum Reading Room
All attempts to escape the oppressive treadmill of life as a struggling writer in London seem doomed to failure.  Biffen’s masterwork is published, but fails to satisfy the tastes of the mass market.  The city, however, empowers some: Jasper Milvain embraces the commercial opportunities offered by literary London and grows in wealth and influence.

But Gissing is less concerned with the causes of poverty than with the human facts.  New Grub Street drives home the every day indignities resulting from poverty.  We learn, from our first encounter with the impoverished writer, Harold Biffen, that: His excessive meagreness would all but have qualified him to enter an exhibition in the capacity of living skeleton, and the garments which hung upon this framework would perhaps have sold for three-and-sixpence at an old-clothes dealer's.

With the growth of the city came a commoditising of literature, with changes to technology and a growth in literacy creating the beginnings of a mass culture centred on London.  There was also a growth in the power of the London-based reviewer and an expansion in the influence of advertising.  Through Milvain’s rise and Reardon’s decline, this process is acted out in the pages of New Grub Street.  Gissing suggests an industrialisation of writing and a pandering to the limited expectations and tastes of the masses.  Through Marian Yule he takes this notion further and imagines a writing machine:

But surely before long some Edison would make the true automaton; the problem must be comparatively such a simple one.  Only to throw in a given number of old books, and have them reduced, blended, modernised into a single one for today’s consumption.

The burgeoning mass culture of the late-Victorian era grew as a result of increased literacy rates following the Education Act of 1870 and changes to the technologies of printing and distribution; there was an increase in the spread of mass-circulation periodicals such as Tit Bits.  Talking about his proposed new periodical, Chit-Chat, in New Grub Street, Reardon’s other friend, Whelpdale, suggests that ‘everything must be very short, two inches at the utmost; their attention can't sustain itself beyond two inches’. He goes on to explain his thinking:

Let me explain my principle. I would have the paper address itself to the quarter-educated; that is to say, the great new generation that is being turned out by the Board schools, the young men and women who can just read, but are incapable of sustained attention.

Given Gissing’s pessimistic views on the development of the publishing industry in London, it is perhaps inevitable that New Grub Street should end in tragedy for the idealistic and good fortune for the unscrupulous.  By the concluding chapters Edwin Reardon and his wife Amy are reconciled as a result of the tragic death of their son.  But Reardon’s health, after long years of poverty, finally gives way and he dies soon after.  Penniless and now friendless Biffen embraces suicide once more, and this time he succeeds.  Jasper Milvain, on the other hand, prospers.  He marries into money and secures an influential editorship. 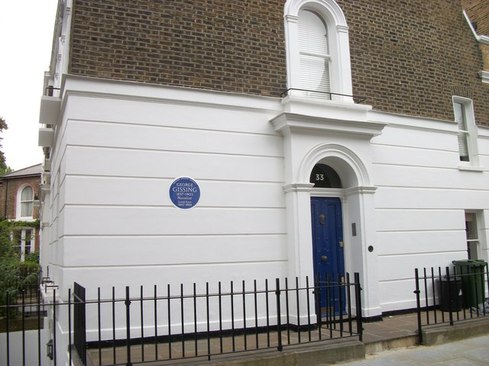 Blue plaque at Phene Street, Chelsea, where Gissing lived 1882-4
Gissing’s great achievement in New Grub Street is to capture a moment in British social history.  He gives the reader a unique insight into the world of the Victorian hack-writer and creates a protagonist who tries to hold to his ideals while balanced on the cusp of a massive upheaval in the publishing industry.  This was a world of which Gissing had ample first-hand experience.  He suggests that only the exceptional individual can break free.    More often than not he or she will go under, as does Edwin Reardon, or prosper but deteriorate morally, like Jasper Milvain.

The literary world evoked in New Grub Street has gone.  However, the same forces that Gissing describes in this book are at work in the publishing industry of today: an industry driven by technological change and too often motivated by status, greed and power.


Bobby Seal is a freelance writer who indulges his fascination with London, literature and psychogeography at his blog: http://psychogeographicreview.com/ 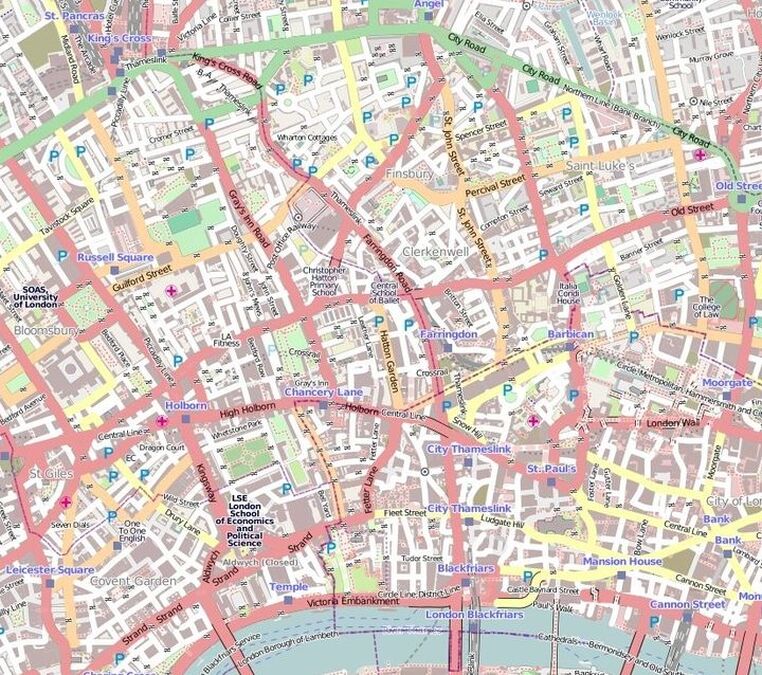 OpenStreetMap: Bloomsbury and the City